Alaska is well estabilished home for the Bald Eagle.

The bald eagle (Haliaeetus leucocephalus) is the only eagle unique to North America. The bald eagle's scientific name signifies a sea (halo) eagle (aeetos) with a white (leukos) head. At one time, the word "bald" meant "white," not hairless. The distinctive white adult plumage is not attained until 5 or more years of age. Immature birds lack this easily identifiable characteristic and can be confused with the Golden Eagle. The Bald Eagle is Alaska’s largest resident bird of prey (the Steller’s Sea Eagle is larger) with a wing span up to 7 1/2 feet (2.3 m) long and weights of 8 to 14 pounds (3.6-6.4 kg). Like many raptors, females are larger than males. Bald eagles are found over most of North America, from Alaska and Canada to northern Mexico. About half of the world's 70,000 bald eagles live in Alaska. Bald eagles were officially declared an endangered species in 1967 in all areas of the United States south of the 40th parallel, under a law that preceded the Endangered Species Act of 1973.

Life history: Found only in North America, Bald Eagles are more abundant in Alaska than anywhere else in the United States. The Alaska population has been estimated to include 30,000 birds at the time of fledging. Bald Eagles are often found along Alaska’s coast, offshore islands, and Interior lakes and rivers. The highest nesting densities occur on the islands of Southeast Alaska. Most Bald Eagles winter in southern Alaska, but some leave the state during cold months. 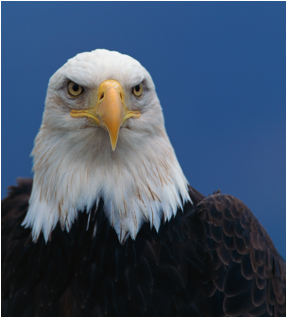 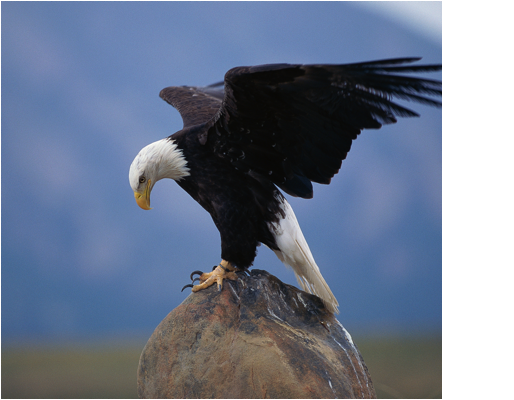 Reproduction and nesting: Bald Eagles often use and rebuild the same nest each year. Nest trees are usually close to water, afford a clear view of the surrounding area, and often provide sparse cover above the nest. In Southeast Alaska, Bald Eagles usually nest in old-growth timber along saltwater shorelines and mainland rivers. Eagles in South-central Alaska nest in old cottonwood trees near water. Nest building begins in April, and both the male and female gather nest material. In late April, two eggs are laid several days apart. Incubation lasts about 35 days. When the young hatch, sibling rivalry is common and the weaker, usually the younger, chick is killed or starved. The surviving young leave the nest after approximately 75 days.

Food habits: Fish are the main diet of the Bald Eagle. Herring, flounder, pollock, and salmon are taken along the coast, while the Interior populations prey heavily upon salmon. Eagles also prey upon waterfowl, small mammals, sea urchins, clams, crabs, and carrion. 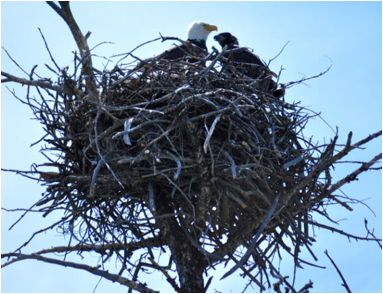