Alaska is well estabilished home for the Golden Eagle. 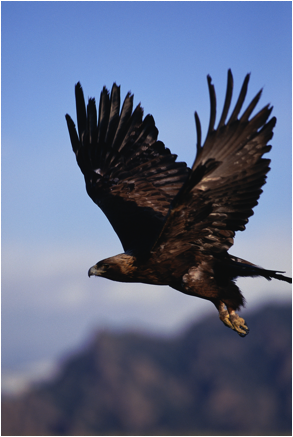 General description: The Golden Eagle is named for the golden buff-colored feathers on the crown and nape of the neck. The adult body color is usually dark brown, and the dark-tipped tail is either darkly barred or spotted. Adult plumage is acquired over a three to four year period and involves a gradual reduction in the amount of white coloration. Immature Golden Eagles have white wing patches and white at the base of the tail. This bird has a wing span from 6-7 feet (1.8-2.1 m) and weighs 8-12 pounds (3.6-5.4 kg). It may carry a weight up to 7 pounds, but prey averages around 2 pounds.

Golden Eagles are found in northern regions of the entire northern hemisphere. In Alaska, the range extends as far north as the Brooks Range with a limited and scattered distribution in Southeast and rare occurrences in the Aleutians or Alaska Peninsula. Not all eagles migrate but most go south when food supplies decline.

Reproduction and nesting: Time of courtship varies with elevation and latitude. Golden Eagles arrive at Denali National Park in March and as late as May in the Brooks Range. Egg laying takes place from late April through May. Usually a clutch of two eggs is laid with 35 to 45 days needed for incubation. It takes 90 to 100 days for the hatchlings to become independent of their parents. Nests (eyries) as large as 10 feet across (3 m) and 4 feet (1.2 m) thick are usually located on cliffs, but trees may be used. Overall fledging success is approximately one eaglet per pair. Since mortality in juveniles can be as high as 75 percent, it could take one mating pair up to 10 years to produce two breeding birds.

Bald Eagle Protection Act prohibits the take, transport, sale, barter, trade, import and export, and possession of eagles, making it illegal for anyone to collect eagles and eagle parts, nests, or eggs without a permit. Possession of a feather or other body parts of a bald eagle is a felony with a fine of up to $10,000 and/or imprisonment, although federally recognized Native Americans are able to possess these emblems which are traditional in their culture. Bald eagles are still listed as "threatened" in the United States.